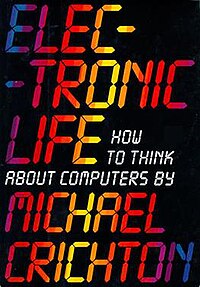 Michael Crichton (who would later author Jurassic Park among other well-known novels) wrote Electronic Life in 1983; the book was his response to friends and acquaintances who were constantly seeking his advice on buying, setting up, and using their first computers and that would become embedded in the culture as computers gained acceptance and penetrated further into the consumer and business markets. His book introduced readers to the vocabulary related to and ideas about computers that, he believed, would become familiar to everyday computer users as they bought and used their first computers. Crichton saw computers as holding great potential for encouraging creativity, and he observed, “one of the great delights of any new technology is that it is for a while, free” (p. 28). He continued, however, to describe how a group that he called computer Calvinists were—even early in the history of computing for the general public—already at work to ensure that computer use became standardized and that users learned and followed the rules. He expressed his desires for computers in schools and throughout society with these words: “Personally, I hope that, for once in the 20th century, a technology stays free. Because the rules-makers always manage to kill the essence while tidying up the details. Dogma replaces direct experience, and ritual becomes reality” (p. 28). Unfortunately from Crichton’s perspective, the computer Calvinists appear to have exerted their influence over computers in schools.